Take a moment to settle down before you scroll further. Because the #QueenofCannes Aishwarya Rai Bachchan slayed the red carpet and all the public appearances she made over the couple of days in the French Riviera!

The moment she landed, all eyes were on her, patiently waiting for her to make the first public appearance. And when she showed up a green Yanina Fashion gown and Swarovski , it was worth it!

The Cannes royalty graced us with her second look in a Mark Bumgarner ensemble, and my eyes ended up looking like

Looks like she had fun twirling around in that splendid gown.

For her first red carpet look at Cannes 2017, Ash decided to show the world exactly why she is touted as the Queen of Cannes. She was seen wearing a pristine blue ball gown by Filipino designer Michael Cinco from his collection “The Impalpable Dream of VERSAILLES”. Needless to say, cupid’s arrow struck many the moment our Goddess stepped in the spot light. This is one look that is going to be talked about for ages!

Still cannot get out of the fairytale land !

4. Black Beauty by the Sea 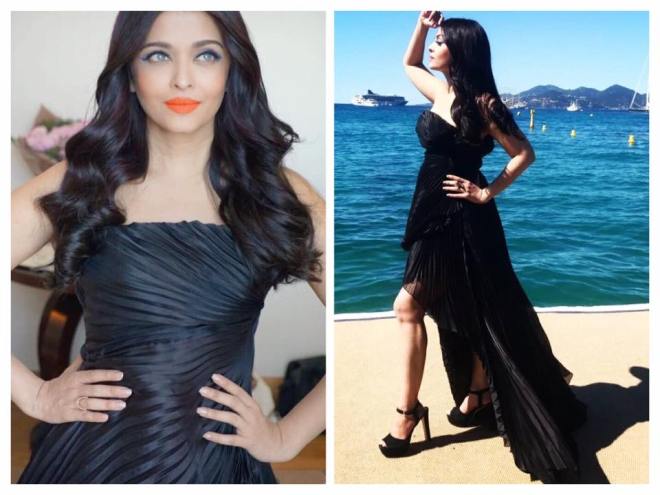 After dazzling the world in her princess avatar, Aishwarya Rai stepped out in the sun dressed by the Lebanese design house Ashi Studio. What caught attention was the neon orange lipstick which drew immediate comparison with the purple of last year! 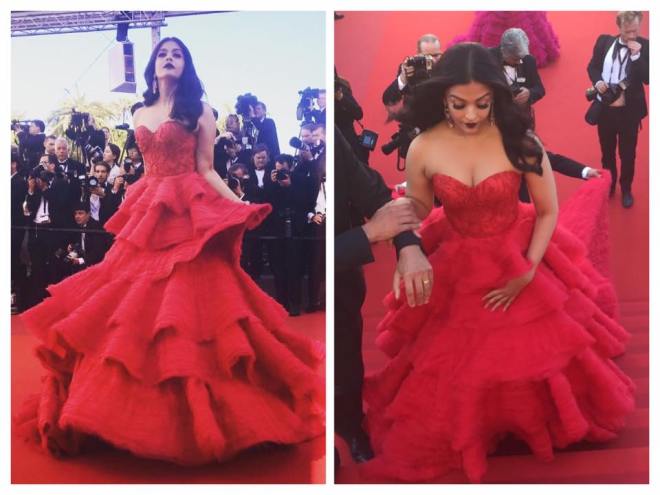 Making a swift change from the ravishing red, Aishwarya was spotted in a custom one shoulder, blush pink Monisha Jaising gown for a photo call.

Before flying back to India, Aishwarya was caught in a beautiful Abu Jani Sandeep Khosla ethnic attire, dressed in gold and blue, as she geared up for the outdoor screening of ‘Devdas’ at the film festival. Revisiting her Cannes debut, I was compelled to remember the iconic yellow saree she had donned way back in time, a look that defines vintage ethnic fashion !

With that, Aishwarya’s reign on the Cannes Red Carpet comes to a close for 2017.

And saving the best for last, L’Oreal Paris India shared this uber cute moment of mommy Ash giving a flying kiss to Aaradhya 😘😘😘

That’s a wrap on #AishwaryaatCannes !

Hair and Make Up by L’Oreal Paris. Because she’s worth it 😉

Copyright Disclaimer: I do not own the images / media featured in the post. All rights belong to the rightful owner/owners. No copyright infringement intended.

Oh the boon and the bane that is overthinking!
Why is there so much stigma attached to #failure, when infact it is one of the best #teachers in life?
Oh how memories fail us sometimes..!
It do be like that sometimes 🤷🏻‍♀️
Taking a moment of solitude with the hills!
Time 🖤
It's kind of ironic, for a generation that is mostly selfish, that we are so hard on ourself. We do not extend the same benefit of doubt to ourself that we do to the people we love.
Abyss 🖤
Need a quick hair spa at home? Well, @tresemmeindia has come up with a perfect solution!
Loading Comments...
%d bloggers like this: